In this installment of our series on The Day the Philippines Hooked Up To the Internet, the Philnet crew converges in Cebu where the connection to the Net finally took place. The historic day was March 29, 1994.

This series is based on an account originally published in March 2001.

As the end of March 1994 drew near, preparations were underway for Dr. John Brule’s “First International E-Mail Conference” at the University of San Carlos (USC) in Talamban, Cebu. It was billed as a three-day conference, from March 27 to 29. Prior to the conference, Brule had been burning up the e-mail lines sending information about the conference using Philnet’s early dial-up connections. USC also had an alternate dialup e-mail connection via the NEC offices in Cebu, which had a dialup link via Japan. There were also Fidonet BBS networks in Cebu that provided e-mail accounts to the public for a small annual fee.

Over at the STACnet mailing list, enthusiasm for the conference ran high. STACnet was an e-mail list composed of Filipino expatriates in technical fields, running off a list server in a research institute in Sweden. It was started by the Department of Foreign Affairs and centered on discussions about how overseas Filipinos could give something back to the Philippines. The E-Mail Conference in Cenu held the promise of having them “show off” Internet applications to their kababayan (countrymen), and a number of members from the US and Europe made plans to attend or give talks in Cebu.

Invitations were sent to the Philnet technical committee, academics and students, prominent local cyberspace netizens. and even the early Philippine professional e-mail providers. It was suddenly “the” event of the early online community.

Roberto “Obet” Verzola of the E-Mail Center, an email-company that catered to the NGO community, came down to give a presentation. Even Joel Disini, who ran an e-mail service of his own, was sent an invitation, but he decided not to go.

This author also received an invitation. I was there to co-present the status of the Philippine Fidonet BBS network (a nationwide network of interconnected bulletin board systems) along with Jojo Sybico, who ran the Cebu leg of the network. Even in 1994, Cebu had an active online scene going on. Sybico’s organization was called C.E.B.U. (Computer Enthusiasts and BBS Users) and they were tasked to set up the dial up email facilities for conference participants.

Bombim Cadiz (now the president of PHnet) was there representing Xavier University in Cagayan de Oro. He had just received his M.S. in Computer Science at Virginia Tech and had returned to the Philippines to teach at Xavier. Just a few days after arriving, Bombim was on a boat to Cebu to attend the conference. He remembers that at first glance, the conference proceedings were rather ho-hum and unimpressive.

“It was probably because I had just returned from the U.S. with an MS in Computer Science and thought that I already knew what everyone was talking about,” he recalled. “I found it funny that they set up an entire conference around the E-mail concet when what I wanted to show everyone was the power of the Internet.”

Even Jojo Sybico was unimpressed with the proceedings. “Personally I found the whole thing a bit geeky,” he said with tongue-in-cheek humor.

But Cadiz recalls being impressed with the Philnet technical team. “I thought the group of ADMU, DLSU, UPD (UP Diliman), UPLB (UP Los Banos) and others were closely knit and were really working together to bring everything up. Then, I was still an outsider, not knowing anyone. I was impressed by their enthusiasm and camaraderie.” Later on, Bombim Cadiz would rise to head the PHnet foundation, which grew out of the Philnet project.

Despite the staid conference proceedings, there was an unmistakable electricity in the air. Brule and Villarica had announced that the Philnet-Internet link might go live during the conference, and everyone wanted to be around when it happened.

Prior to the conference, Ateneo’s Richie Lozada had planed in earlier hand carrying a Cisco 4000 router to be attached to a leased line connection provided to USC by the Philippine Long Distance Telephone Cp. (PLDT) in time for the conference. The USC router would connect to Philnet’s main Cisco 7000 router at PLDT in Makati. Everything in Cebu was primed and ready. But when the connection was exactly going to happen was anyone’s guess.

PLDT had been doing tests on the leased line to the US for several days before the connection to US Internet provider Sprintlink could be activated. ComNet head techie Benjie Tan was assigned to activate the main router in Manila.

During the conference, Villarica was getting anxious. he made several calls to ComNet’s office in Makati to follow up the connection.

Then on the evening of March 28, Benjie Tan got the word that the line was ready. He flew in straight from a training trip in Hong Kong to setup the main Cisco 7000 router at PLDT’s network center at the Ramon Cojuangco Building in Makati and activate the link to Sprint.

At 1:15 am on March 29, Tan established a live Internet connection between the Philnet network and Sprint. Soon afterwards, he posted the following message on the Usenet newsgroup soc.culture.filipino:

Subject: The Philippines is In!

As of March 29,1994 at 1:15 am Philippine time, unfortunately 2 days late due to slight technical difficulties, the Philippines was FINALLY connected to the Internet via SprintLink. The Philippine router, a Cisco 7000 router was attached via the services of PLDT and Sprint communications to SprintLink’s router at Stockton Ca. The gateway to the world for the Philippines will be via NASA Ames Research Center. For now, a 64K serial link is the information highway to the rest of the Internet world.

Ar 5:30 AM, Tan called up Dr. Villarica in Cebu, rousing him from his slumber. “Sir, it’s all done,” he said. “That’s great! Great!” Villarica exclaimed.

Villarica put the word out to the Philnet technical committee that the connection just went live in Manila. They were to assemble at USC early morning to activate the connection to the main router at PLDT in order to get the live Internet link going in time for the presentations that day. The conference was drawing to a close, and it needed to end with a bang.

Richie Lozada recalls having slept in late due to a hard night of partying. The team actually expected the connection to happen at a later time. They groggily woke up to the news that the link in Manila went live.

“My first objective – since I came in a bit later than the rest – was to rush to San Carlos and look for an access terminal to log into the Cisco 4000. Back then you couldn’t just carry notebooks – you had to reply on workstations actually connected.”

Lozada logged in through a terminal located at the main auditorium at USC where seminar proceedings were going on. The router needed to be readjusted to divert the connection from the campus local area network to the main Philnet router at PLDT. Then he had to adjust the presentation computer that was hooked up to the projector so that it could access the Internet. It was a rush job, and he was configuring settings even as people started to stream into the auditorium.

When Lozada had finished, Dr. John Brule was about to commence a demonstration of live chat. Lozada informed him the connection was up. Brule nodded. He executed the chat commands to chat with his son Mark over at Syracuse. 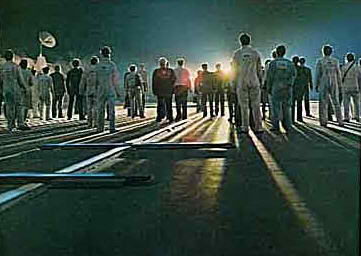 Lozada recalls an announcement went out, possibly from Dr. Villarica. “This is not a dial-up connection. This is the real thing. Our link to the Internet is finally live.” People were applauding like crazy. People were thinking, finally the Internet is here, and we finally had live connectivity to the outside world.

We had made contact, and  from that moment on, the Philippines would never be the same again.

(To be concluded in Part 6)

5 thoughts on “Hooked Part 5: Off to Cebu – The First Contact”