The Philippine Daily Inquirer seems to be taking some technology lessons from George W. Bush. GW has been credited for inventing the term “the internets” (probably during one of his more confused moments) as a new term for what we know as the Internet. This in turn has morphed into the often used term “the interwebs”. In a similar fashion, the PDI appears to have coined the term “the YouTube” when refering to the popular video sharing site.

I first came across this on the front page of the April 25, 2008 issue, in a piece with the sensational eye-popping headline “Gay groups up in arms over priest’s rectal swipe” written by TJ Burgonio. 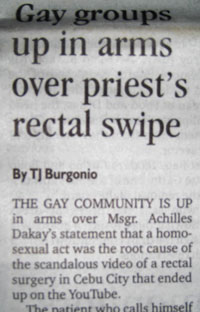 The gay community is up in arms over Msgr. Achilles Dakay’s statement that a homosexual act was the root cause of the scandalous video of a rectal surgery in Cebu City that ended up on the YouTube.

Ordinarily I would have just passed this off as an oversight, but in an accompanying piece that delves deeper into the subject by writers Leila Salaverria and Jhunnex Napallacan, they repeat the term twice.

From the article “Hospital liable for rectal video; the ‘prostitute’ more liable”:

The video uploaded on the YouTube showed more than 10 people in the operating room laughing and cheering as Arias was extracting a perfume canister from the 39-year-old patient’s rectum.

And further on, they write:

Bagano said he and the defense team had been able to identify the person who took the video and uploaded it on the YouTube as a male intern from a nursing school in Cebu City.

This leads me to wonder if there’s a style guide somewhere lying around the Inquirer office that instructs writers that this is the correct way to mention the site.

In a similar fashion, it’s not The Twitter, The Yahoo, The Google, The Gmail, The Digg, The Revision 3, The CNET, The Friendster, or The Mahalo either.

We might make an exception for Facebook – after all when Mark Zuckerberg started the site while a student at Harvard, he did refer to it as “The Facebook.”