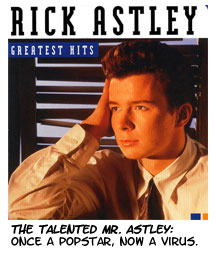 Rick Astley was just one big bundle of earnest promises (or lies, if you were the female he was singing to) when this song hit the charts back in 1987. And as improbable as it seems, this 20-year old piece of cheese, “Never Gonna Give You Up” (written by the shameless purveyors of cookie-cutter hits, Stock/Aitken/Waterman) was most likely the #1 song on the Internet on April 1, 2008.

April Fools Day ’08 will probably be recalled as the day when the practice of “Rickrolling”, the hot Internet meme du jour, hit its peak. Rickrolling refers to a prank played out on the Internet, where an innocent looking hyperlink inexplicably leads the surfer to a video of Rick Astley singing “Never Gonna Give You Up”. The You Tube page where that link leads to has racked up an impressive 9,048,982 views as of this writing (and odds are that could be well over 10 million views when you finally read this).

If you fell for this trick, then “You Got RickRolled!”

There has always been a lot of silliness assocated with April 1 on the Internet, usually in the form of outrageous fake news items. But this year, Rickrolling was the preferred trick of the tail. After building up for months as an underground phenomenon, hundreds of web sites participated in the craze (or “meme” to use the current terminology), embedding a Rick Astley link within a page, an 80’s Easter Egg for one to sniff out, click – and, well – dance to.

The improbable result of all this is that eighties relic Astley is suddenly hot again. And teens and 20-somethings are rocking out to “Never Gonna Give You Up,” a tune that one would have hoped would have been relegated to the dustbin of 80’s trivia.

The mainstream media has picked it up. Here’s the New York Times and BBC on the whole Rickrolling thing. The LA Times even featured a new interview with Astley. 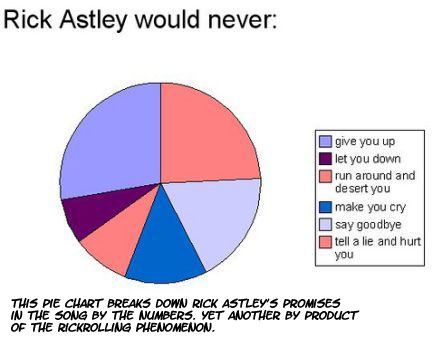 Astley’s sudden re-emergence, 20 years after the original video aired on Classic MTV, is probably a bigger deal outside the Philippines. But as we all know, the Philippines has always been one of those strange places on this planet where 80’s music never really went away, and FM radio transmisisons still resemble the soundtrack of “The Wedding Singer” – or for that matter, “The Breakfast Club,” “St. Elmo’s Fire,” “Pretty in Pink” and other brat pack flicks of the era.

Rick Astley songs will still perk up over a department’s store’s sound system- along with Toni Basil’s “Hey Mickey,” the JoBoxers “Just Got Lucky”, Modern English’s “Melt with You”, the Cure’s “In Between Days” – ah, the list can go on and on. The point being is that Rick Astley is still so mainstream to our quaintly pinoy time warped taste that a link to “Never Gonna Give You Up” isn’t as bizarre as it could be elsewhere.

But no matter! Are we going to let a skinny English twit like Rick Astley overthrow the You Tube pre-eminence of the “Cebu Dancing Inmates Getting Jiggy With Michael Jackson’s Thriller” viral video? Hell No!

I propose that the Philippines unleash an even more outrageous Internet meme to an unsuspecting world. It is our patriotic duty. We need some OPM pop relic to counter the Rick Astley virus.

I racked my brain for a bit, thinking about who this could be. The thought of Janno Gibbs did cross my mind, since he does bear a passing resemblance to Astley. The same elvis-ish pompadour, same slight build and height, and even the same downright scary basso profundo voice.

But no Janno Gibbs song came to mind that was even half as catchy as NeverGonnaGiveYouUp.

Then in a momentary flash of inspiration, it ocurred to me that we might have to reach back a little further back in time. To Rico J. Puno. Back when he was still calling himself Rico Baby. With the classic Rico J pimp look: huge afro, the polyester shirt opened up way down to the navel, gold chains, the wide flared bell bottoms (also polyester) that threatened to sweep every dusty floor to a sparkling shine.

To paraphrase Bruce Wayne, “It is an Omen! We shall have MACHO GWAPITO as our pinoy Internet Meme!”

And we shall call the phenomenon: “RICOROLLING!”

This video doesn’t have much in terms of footage though. And so I pass the challenge on to you, my blogosphere brethren, to come up with a better Macho Gwapito video. Preferably featuring shots of Rico J the way he used to be – with the humungous ‘fro and the bad-ass mustache. And the original disco track.

And then we shall seed the video in hyperlinks across the nation. Hell, give a link to Brian Gorell, with his site traffic, he’ll get it across to everyone in no time.

We *will* kick Rick Astley’s butt. I just know it! RicoRolling, baby!!!

Photo: Rico J, all the Way! From the uber-cool collection of vintage album covers at Nostalgia Manila.